What's In A Name?

I started this a few times already. This is a topic near and dear to my heart, and every time I write, I wonder how I can bring my ideas across. Not necessary to convince, but to communicate such that the other party understands.

I have recently been trying to frame my thoughts as succintly as possible. A new interest for me, to see how few words it take to put across an idea. And as I write this, I realize that a lot of the time, the shortest and fastest way someone communicates an idea across, is a name.

The giving of a name is perhaps one of the most significant acts anyone can do.

A name defines, sets limits, shapes the same thing that it is given. A name describes, sketches in a stroke of sounds the essence of the object, what the object IS.

In almost all cultures, a child is given a birth name. That name encompasses the hopes of the parents. In giving the name to a baby, a clean slate of a new soul, the parent puts the first mark on that slate. The defining stroke, an outline of what they wish for in the child. This mark sets him apart, the first thing that this new being truly owns.

When the child grows up, in some places in the world, they're given the right to choose their adult name. I think that's good. The new adult decides what he wants to do, who he wants to be, and then from there, names himself. That name then encompass his choice of his path in life, the definition of him to himself, the description of his identity.

I was given a Christian name when I was a baby. At a time that I cannot remember, I found the meaning of my name. It means "prosperous protector". I like to tell people I try my very best to protect. I'm still working on the prosperous bit. It is not easy to live up to the name.

I try to stand up for the underdog, I attempt to help those less fortunate. I hate bullies with a passion that fills every atom of my being. Over the years, I would like to think that I have lived up to the protector part of my name. After all, I always wanted to be a superhero. Just like what Seinfeld said.

"Here's the thing on men, I'm gonna give it to you now. All men think of themselves as kind of low-level super-heroes... in their own environment. When men are growing up and they're reading about Batman, Spiderman, Superman, these aren't fantasies. These are options. This is the way men really look at their own lives. I'm not even supposed to be telling you this. I'll give you a perfect example of what I'm talking about, did you ever see a guy moving a mattress tied to the roof of his car. He's out on the highway with this thing, he's always got the arm out the window, holding the mattress too, right ? Whatever he's rigged up there, he's always helping along with the arm. This is classic male idiot super-hero thinking. This moron actually believes that if the wind catches this huge rectangle at 70 miles an hour, "I got it, I got it. Don't worry about it. I'm using my... arm !"


I have only used 3 nicknames over the years online. Each one, I spent a long long time thinking. Most are related to my real name.

Centurion - my first ever IRC nick. Eventually shortened to cent, cos that's what everyone called me.

Sentinall - Likewise, a defender. The misspelling only because Sentinel and sentinal were both taken.

Vandalin - the only name not related to the protector. It means wanderer in Old English. Why? Maybe that's how I feel much of the time. Not really tied down to a place, a free spirit. Never really belonging to a place, or to anyone.

Will I change another name as I move on through this life? Maybe, then again, maybe not. As far as the protector is concerned, well, he will never go away. Made sure of that, at least. 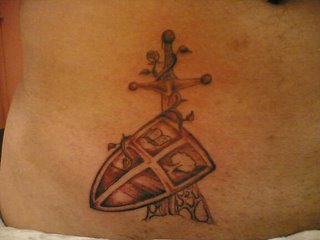 I used to call myself Acidrain.. I'm poisonous..

i've got several flings, but only 3 serious relationships with nicknames. one of them is still running while i triple-time the other two, and each of them actually has a different root. deep inside i probably feel like 3 people, i guess.

Centurion...one of my galfrens used to have that nickname too..

HB - And I used to know a gal who's nick was venom. Sister of yours?

Zlel - you know, I never quite figured out what your nick meant.

Fire - damn, what's a gal doing with such a masculine nick?

zlel - never capitalised (i'm case sensitive)... it's the initial characters of the words of a bible verse in hebrew. see neh 13:31a. in hebrew.

hmm didn't you know i flunked ancient languages in school? :P I'll take your work for it.